We landed in Istanbul to the news that bombs had gone off in London. Mobile phones message tones were going off all around us in the queue for the passport control. Such a paradox – here were we arriving in a Muslim country when the very thing had been feared was happening back at home – a terrorist attack in the heart of my home country. Never have I entered a country with such mixed emotions but reassured that my own stepdaughter was safe having travelled on the train in front of one that was blown apart. What I did not know then but that I know now was that I could not have come to a better place to deal with the emotions I was feeling. What I was about to experience was in total contrast to what had happened back home. My contacts and friends in NLPGrup – the company that was hosting my visit, could not have been more caring, more welcoming and more understanding. They asked me at some point during my stay how my impressions of Istanbul compared with my expectations before my arrival. I realise that I had similar expectations to those that I had before visiting India – that it would be very formal, very dissociated and primitive. I had a similar sort of image in my mind to the faded black and white historic photos on a set of place mats from Istanbul that I had been given years ago from a friend returning from a holiday there.

So what was it like? Vibrant was the first word that came to mind. Buzzing with life and business. Totally service oriented – streets peopled with waiters swinging trays of glasses of tea, courtesy at every turn, and an abundance of cafes, restaurants and colourful rich food. And noise noise noise.

And the course – well another preconception was shattered. Knowing that I would be working with translators I realised that I had imagined the participants remotely screened behind glass walls as if in a world conference… Little did I expect to experience skilled voices mirroring my own talking gently in my ears as if I had a friend whispering to me supportively all the time. Nor had I expected the charm of their young personalities caring for me in only a way that my mother might once have done. What I had imagined to be a barrier turned out to be a luxury supplementary Meta perspective. Turkish and English seemed to merge into one language the translation only serving to help me to believe that I could understand and communicate with anyone here. The divide between the two languages began to blur as we alternated between Turkish and English and simultaneously learned about both. 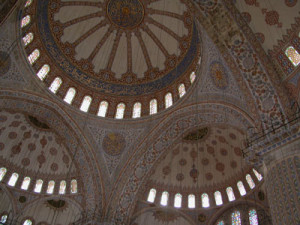 When we teach NLP I believe that we both learn and teach about culture individual culture, team culture, company culture, family culture. So where better to do this than in an environment which invites us to learn about culture every moment of the day. And I learned so much about the Turkish people and their faith. I learnt about their devotion, the constant call to prayer that intermingles with their daily work, their humour, their compassion, their skill, their tolerance, their work ethic, their professionalism. Istanbul is a merger of East and West, the old and the very very new. Our visit to the Old Mosque Hagia Sofia – the ‘pink mosque’ as one of the translators Asu called it, captured my imagination even more so than the awe inspiring Blue Mosque. There amongst the centuries old stones was a modern exhibition of the mosaic images showing them as they once were before age and erosion. Accompanying this was an explanation of the way that this exhibition had been designed…..

In designing this exhibition Ahmed Ertug searched for ways to reveal the spirit without coming between the viewer and the things being displayed. Combining modern materials with stone whose choice was inspired by Hagia Sophia’s columns, he has erected transparent walls.

In doing so, our wish was to make it possible for the viewer to examine the tiniest detail in a photograph and then immediately make the transition to the gigantic space that rises behind the panels and is visible through them: to enable the viewer to establish a personal relationship between the originals of the images and the artists interpretations of them.

A crystalline palace … A contemporary approach in a holy setting.

A powerful metaphor for everything that this visit and this training was about.

As I write these words news comes through of bomb here in Turkey and the prime ministers words “Terrorism is independent of religion or race or …….?” And I believe that the more that we learn about, and with, and from other cultures the more we can approach the truth that we are one in this world and beyond. If we achieve a small step towards this through the teachings that we give then we have achieved something special. This was much more than a course …